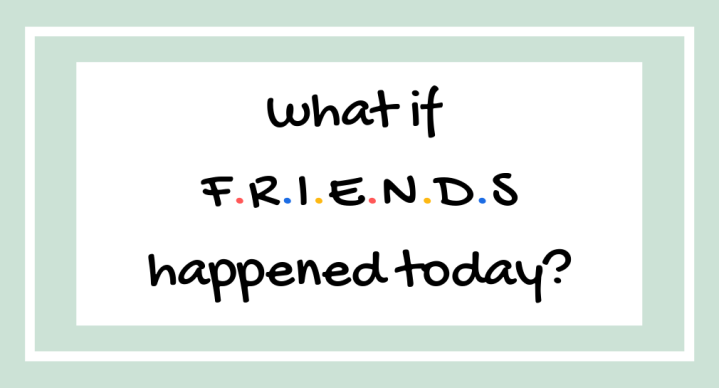 IT SEEMS THE SHOW FRIENDS is becoming popular with a new audience & everyone is binge-watching this classic 90’s series on Netflix. I WATCHED it with my dad when I was a kid & I’ve kept watching throughout the years. It’s just one of those feel-good shows that’s relaxing to have playing in the background, especially if you’ve seen every episode like 100 times. I SAW A PICTURE on the internet about how different it might be if FRIENDS happened today & had to blog about it. IMAGINE how hilarious their group chat would be?

p.s. I GUESS it should be noted that a lot of the jokes made in FRIENDS aren’t widely accepted anymore. From fat-shaming to toxic relationships, humor has changed a lot since the first episode aired like 25 years ago. IF YOU’re a younger person going to watch this for the first time, just be aware that not all of the jokes are considered appropriate so many years later. ✌🏻

IN CASE YOU MISSED IT:

COMMENT BELOW, let me know what YOU THINK would be different if friends was filmed today!

69 thoughts on “IF FRIENDS WAS FILMED TODAY”

i make videos & write on my blog.